(Sheherezade 14 will play June  7 through 28 at The Exit Theatre on Thursday, Friday and Saturday Nights)

Summer is icumen in, and with it  the stirrings of new life for our local Bay area theatre scene. For thirteen consecutive years, the Playwright’s Center of San Francisco has been producing Sheherezade, a celebration of new short works by local playwrights. Throughout the month of June, audiences can delight in a plethora of world premiers. As Polonius famously says of the players in Shakespeare’s Hamlet, here you can find works  “…for tragedy, comedy, history, pastoral, pastoral-comical, historical-pastoral, tragical-historical, [and] tragical-comical-historical-pastoral”. In other words, “the play’s the thing”.

Since 2012, the Playwright’s Center has been joined in the production of Sheherezade by Wily West Productions, a company devoted exclusively to producing new plays by local playwrights. Over the years, Wily West has presented the original work of dozens of local playwrights. The Playwright’s Center has been running workshops since 1980. Together, these two organizations make of the San Francisco Bay area a true shangri-la for aspiring playwrights. 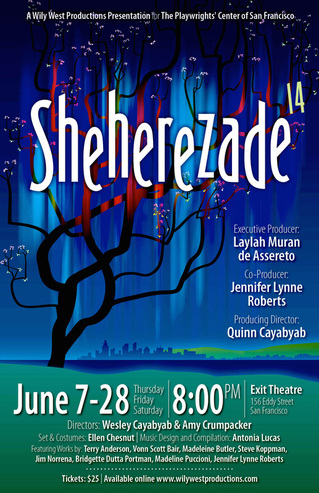 This year, the series is helmed by Wesley Cayabyab and Amy Crumpacker, each of whom has taken on the responsibility of directing four of the eight plays. Wesley Cayabyab is well known to Wily West audiences as an interesting and charismatic actor who has appeared in numerous productions. Amy Crumpacker is a teacher and actress with a long history of theatrical endeavors.

Terry Anderson is a fairly new playwright, but he has been a writer in various genres for many years, ever since earning his English degree from UCLA. He then went on to earn a Masters in the teaching of writing from Humboldt State. Possessed of a curious mind, he is also a certified “dream worker” with the Marin Institute for Projective Dream Work. In “Dissonance,” a pleasant Sunday is interrupted by an unexpected and disturbing encounter.

Vonn Scot Bair is a dedicated blogger at The San Fransisco Scene —Seen!, where you can read of his many adventures, accompanied by original photographs. Not just a playwright, blogger and photographer,  he has also accumulated over 200 acting credits and can bake outrageously scrumptious chocolate chip cookies. “The Duck” features a disappearance, an unsolved murder and a surprise.

Madeleine Butler is a jazz singing playwright, improvisational actress and a member of the PlayGround Writers’ Pool. By day, she writes marketing material for the high tech industry. In “The Box”, her character Gina goes searching for a bit of her childhood.

Steve Koppman is well established as a literary writer with work published in Zyzzyva, the renowned West Coast literary journal, as well as such prestigious publications as The Nation, The Chicago Tribune and The Village Voice. His short plays have been anthologized and produced in multiple cities around the United States. As an actor, he has performed at various Bay area theatres and traveled to the famous Edinburgh Fringe Festival in Scotland. His play, “Almost Like Being Alive”, offers an unexpected take on the life of a Starbucks barrista.

Jim Norrena recently earned his MFA in creative writing from The California College of The Arts, and continues to work there as a web editor and content manager. He is well represented as a reviewer of books, theatre and film for many Bay Area publications. He is also a dedicated photographer whose work has appeared in national publications such as The New York Times and locally in The San Francisco Chronicle and elsewhere. He often photographs theatrical productions. He has recently completed a full length play with the very intriguing title, “Marriages for the Byrds”. For Sheherezade, he presents “Reframing Rockwell”, a different look at the famous painter of Americana.

Bridgette Dutta Portman has been an active member of the Playwright’s Center of San Francisco for several years and now serves on its board. 2014 marks her fourth participation in the Sheherezade festival. She has had plays produced throughout the Bay area, around the country and even across the Atlantic in Wales! “Brew, Drink, Repeat” asks the question: “What if your coffee shop turned out to be located on a mobius strip?” It’s a jittery proposition!

Madeleine Puccioni’s first full-length play, “Two O’Clock Feeding”, was produced by the Magic Theatre in 1979, part of a season that included work by such future dramatic stars as Wendy  Wasserstein, Sam Shepherd, Joseph Chaikin and Michael McClure. “Two O’Clock Feeding” was then published in the prestigious anthology, “West Coast Plays.” Subsequently, Madeleine took a 30 year hiatus from playwrighting while teaching English at a community college. She is now an active member of Playground SF, Playwrights Center SF, and The Towne Street Theatre Co. in Los Angeles. In “The Interview”, she investigates whether an English teacher can make a successful career transition to bartender.

Jennifer Lynne Roberts is another proud possessor of an MFA in creative writing from the California College of the Arts. A participant in earlier incarnations of Sheherezade, she has had numerous plays produced around the Bay Area. In “Photo Dynamic Therapy”, she offers her take on the challenges of getting a romantic relationship underway.

The plays will be brought to life by a company of some of the Bay Area’s most high profile actors, including Cameron Galloway, Philip Goleman, Rick Homan, Jason Jeremy, Cat Luedtke, Leotyne Mbele-Mbong, and Gareth Tidball.

The festival will be presented at The Exit Theatre, one of San Francisco’s most unusual institutions: a proud artistic community in the heart of the Tenderloin. Under the direction of artistic director, Christina Augello, The Exit Theatre annually hosts as many as 100 independent theatre companies who might not otherwise have a place to show their work. Besides hosting Sheherezade, every year they produce the San Francisco Fringe Fesitval and DivaFest, two of San Francisco’s most impactful theatrical traditions.

For further information about Sheherezade 14, and to purchase tickets, click here.