(“The Habit of Art” plays for a limited run at the Eureka Theatre in San Francisco from July 31 through August 23, 2014.)

Allan Bennett, one of England’s leading playwrights, is not as familiar to American audiences as he might be, although fans may recall that he was a founding member of the comedy troupe, Beyond The Fringe (along with Peter Cook, Jonathan Miller and Dudley Moore) and movie fans may recognize him as the screenwriter of the much-admired “Madness of King George”. It is a treat when any theatre company decides to produce a Bennett play. It is especially exciting to have a Bay area premiere of relatively new work such as “The Habit of Art.” Actually, Theatre Rhino presented this Bay area premiere last Spring, so the current production is a return engagement. We’re lucky to have it. 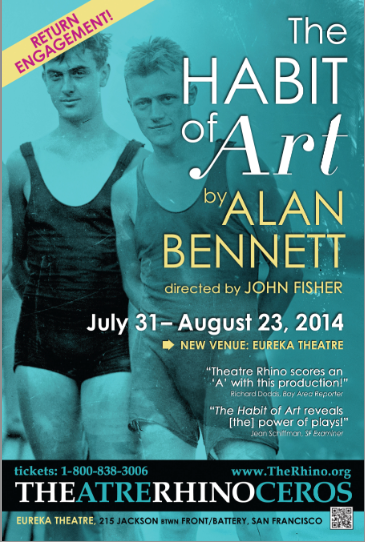 Utilizing a play within a play format, “The Habit of Art” is constructed like nesting dolls—masks within masks within masks —and the result is fascinating. It is set on the stage of the National Theatre in London, where a company is rehearsing a new play about the poet W. H. Auden, and the composer Benjamin Britten, narrated by their biographer, Humphrey Carpenter.

The intellectual challenges add up profusely, one atop the other, all reflecting on the theme of “The Habit of Art”. The script is an intellectual smorgasboard of the highest order. It is also superbly entertaining, thanks to careful, intelligent direction by John Fisher (who also plays the actor Henry who plays the character Benjamin Britten) and fine work by the entire cast.

Donald Currie is fascinating to watch as he creates the dual characters of the heterosexual, but poetry-loving actor Fitz (who struggles to remember his lines) and the homosexual, “let it all hang out” Auden, whose indifference to such matters as personal hygiene and good housekeeping confuse our understanding of his “role” as “famous poet”. There are those Russian dolls again: one character encased in another encased in another encased in another creating a seemingly endless hall of mirrors effect. As Henry (actor)/Benjamin Britten (character), John Fisher performs as well as he directs. Henry has his own secrets, implied but never revealed, as does Britten. All of this is managed with maximum clarity, so that the viewer is challenged and engaged but needn’t be frustrated or confused.

The remainder of the cast, playing the playwright of the play-within-the-play, the stage managers, and actors playing a young singer being tutored by Britten, a rent-boy visiting Auden and biographer Humphrey Carpenter are all equally good and each player has moments to shine.

This fascinating and subtle intellectual jaunt will be deeply satisfying for demanding audiences, who go to the theatre to think as well as to be entertained.