by Charles Kruger
Rating: ***
(For an explanation of TheatreStorm’s rating scale, click here.) 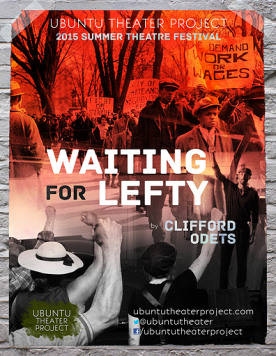 The 1935 opening night of Clifford Odets’s “Waiting for Lefty” is one of the great stories of the American theatre. It was the play that put the Group Theatre on the theatrical map. Founded by Harold Clurman, Cheryl Crawford, and Lee Strasburg and including Stella Adler and Sandy Meisner among its members, the Group was revolutionary in its day and still remains a force to be reckoned with. Inspired by left wing politics of the time, the Group set out to create an egalitarian workers theatre, without stars and focussing on ensemble acting, presenting plays appropriate for an audience of workers. Several of the 20th century’s most influential acting teachers and actors were members.

“Waiting for Lefty” was a perfect vehicle for the Group Theater’s ideals. Politically potent, focussed on workers’ issues (a Taxi strike), and featuring an ensemble rather than individual stars, it exploded on the New York theatre scene of 1935 like a hurricane. Actors, dressed in street clothes, were placed throughout the theatre. When they burst out loudly with cries of “Strike! Strike!” the audience was astounded and electrified. Harold Clurman famously described the reaction of the opening night attendees:

“The first scene of “[Waiting for] Lefty” had not played two minutes when a shock of delighted recognition struck the audience like a tidal wave. Deep laughter, hot assent, a kind of joyous fervor seemed to sweep the audience toward the stage. The actors no longer performed, they were being carried along as if by an exultancy of communication such as I had never witnessed in the theater before. Audience and actors had become one ...“

The play and the excitement it generated is legendary, and any revival carries with it an enomous weight of history.

Ubuntu Theater Project’s revival offers considerable excitement of its own. Staged in a car dealership that features antique cars from the 1930s, it effectively moves the audience back in time t0 the era of the Great Depression. The cries of “Strike” are galvanizing, as they need to be. The political content is as contemporary as yesterday’s  headlines, at a time when exploitation of workers, the decline of union power, and the realities of income disparities and discrimination against immigrants are capturing the attention of the electorate.

Still, “Waiting for Lefty” remains a period piece, in period costume, and its language — though richly poetic (Odets was a marvelous wordsmith) — often seems strained and dated.

This production is at its best when it effectively incorporates song and during the group scenes when the workers are galvanized to call for the strike. The other more intimate scenes — a series of vignettes with barely disguised political content — are played in a straight forward fashion that presents the story and arguments effectively, but sometimes lacks an emotional depth and subtlety that might have been achieved in the hands of more experienced actors.

Audience members who have heard of this very famous play will be enlightened and excited by this revival, and will certainly get what all the excitement was about.

At a brisk 80 minutes (without intermission), and staged in a very unusual and stimulating venue, “Waiting for Lefty” makes for an unusual and satisfying night of theatre.

Ubuntu Theatre is planning a full season for 2015-2016, and the Bay area theatre community should be watching with interest to see what comes.