In April, 2014, I attended “The Speakeasy” at a secret location in the Tenderloin, and it blew my mind.

Back then, audiences entered this world of the past through a secret passage behind Joe’s Clock Shop in the tenderloin; nowadays, they find Joe’s or other secret entrances in North Beach, at the edge of Chinatown.

But where do they go?  It may be they are entering a porthole to the past, or it may be they are in an otherwise perfectly ordinary nightclub (Club 1923) that, this evening, has been taken over by ghosts who relive one particular night from long ago, when they were still alive: specifically, August 2, 1923, the day that President Warren Harding died in San Francisco’s Palace Hotel, under what some thought were mysterious circumstances.

Whatever the explanation, those fortunate enough to be present when this mystery unfolds are treated to an incredible array of stories and performances. There is a drunken but brilliant chanteuse performing in the cabaret; there are battle-scarred soldiers trying to find their way as civilians after World War I; desperate gamblers and garden variety drunks. Any kind of story might unfold. It is even possible to be pulled aside by one of the characters for a private tete-a-tete on matters of intimate import.

In my 2014 review of its first iteration (located near Union Square) I concluded that “The Speakeasy” is “much more than a novelty, it is theatrical art of a high order.”

Now it is 2017 and “The Speakeasy” is still wonderful. We sincerely hope it is with us to stay in North Beach, as permanent and iconic as “Beach Blanket Babylon.”

After my second visit to “The Speakeasy,” I found myself reflecting on the unusual depth of the experience. This is no ordinary theatrical event but a visit into an alternative world where one is not merely a spectator, but a full participant in its creation. It occurred to me that a work of this complexity deserves something more than an ordinary review. “The Speakeasy” is different for every audience member and on every occasion. All of the characters have plays of their own, and each audience member can follow a character to view a single play, or move about catching glimpses of several stories, all of which are thematically related.

I wondered what it would be like to attend and review the “The Speakeasy” while focusing on a single character. And then I thought, “What if this were done by a poet instead of a typical theatre reviewer? How might a poet respond?”

This led me to approach the producers and ask if they would accommodate three distinguished San Francisco writers (and myself,  less distinguished, but certainly enthusiastic) to follow a single character, and they agreed.

So, on one Saturday night in February, poets Charlie Getter and Sarah Kobrinsky, short story writer Sean Taylor, and theatre reviewer Charles Kruger (ce’st moi, “The Storming Bohemian”) were each assigned to follow a single  character for the entire evening. Charlie glued himself to Velma, the nightclub chanteuse (played by Lauren Lorentz).  Sarah followed the ambitious Leland (played by (Jason Pienkowski), a man saddened by disappointment, while Sean followed Velma’s drunken and envious Cabaret colleague, Dorothy (played by Jessica Lea Risco). I spent the time with the lonely gay man, Eugene (played by Robert Molossi), whose night ended badly. We were led through secret exits and entrances, privy to the magic that brings the ghostly Speakeasy to life, and we experienced a remarkably intimate relationship with the actors playing our assigned characters. Sean reported that he logged 2.5 miles following his character, Dorothy. At one point, she appeared to be pulling him rapidly by the ear through several rooms while he stumbled haplessly behind. In this manner, we each became part of the show, along with all the other audience members. Sometimes, at “The Speakeasy,” it is difficult to know who is actor and who is audience: everybody present is a co-creator. 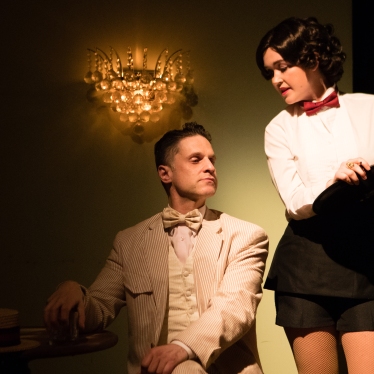 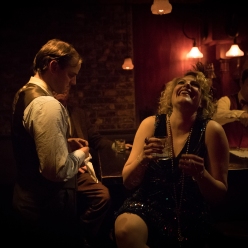 Following this remarkable night, I waited anxiously to see what our poets would produce, and I was not disappointed. Here are their responses.

An Ekphrastic Verse for Velma

“Now come on, paint up, powder up,
Put on your swellest clothes
Go out and make whoopee!
Men?! You’ll get them by the score!
Neglected wives shouldn’t worry
that’s what god made sailors for!”

and years evaporate
little things remind you when you are,
exit signs and
accessible doorways

and I can feel that gravity
that might be Sophie.

or wither
as a cinder
far long past
their splendor

stars fade as new stars replace them
but their gravity resonates
and their light screams out
at an incredible speed
back across time
at the speed of, well, light, go figure

but all light that stars cast
are simply the result of the
turning and churning and tumult
inside, the fires within

you can make a person that
you can pretend to be
and build it into what you want
it to be, what you dream to see
and it can be everything

forgetting that there is nothing
that is everything!

and the only organ that has
never failed you

the organ that represents
the last leg of the three-legged
stool that you think holds up your life,

has a time limit

sex is for suckers
or the sucked upon!

because she still has
all the gravity of a star

you still turn
the way you do

Through the grandfather clock,
through the looking glass,
behind closed doors, under wraps,
be careful, the walls have ears.
No, really. The walls have ears.
See over there?  That mirror.
Pick up the receiver. What do you hear?
The still small voice of your heart
sure speaks easy, no? The voice
that says I coulda been somebody!
Like that giant Gianini. Well,
in this gin joint you are somebody.
We won’t stifle the likes
of Gustav Eiffel or any ordinary guy
chasing after the American dream,
holding out his empty hands
for the next sawbuck, the next big win,
the next big ship to come in.
Through the grandfather clock,
through the highball glass,
inside coat pockets, at the craps,
a bottle of hooch with enough burn
but won’t make you blind.
Just the opposite, it’ll make you see
you’re still in the game, still going strong,
your hopes and dreams distilled
into one moment, one card, one chip—
double down, double down
and then it’s gone.

In his case, loneliness wears a white suit
And plays an endless game of solitaire
In a solo frame of mind

Loneliness has made him kind
And  taught him, too, to drink alone

Tomorrow he’ll quit for sure, for sure
If he can think of a good enough reason

As long as language is liquid, it’s coursing behind the pressure of Dorothy’s tongue. Hers is white hot, it’s a fireplace poker forged after years of kicking the timber. She delights in counting the sparks, in lighting cigarettes,  until the house has all but burned down.

It’s an ugly world for the unforgiven, when liquor flushes the cheeks of lifelong aspirations.

“Jellybean,” she screams. “You’re all just a bunch of jellybeans!” And, ravaged, her purse wears the souvenirs of ex-lovers lost to drinks and harmful fun.

If indulgence is on tape, if the radio is playing her favorites, if she loves you, she will sing to you. And you can watch the pearls that run rapacious laps around her neck vibrate when she smiles too hard. I remember our marbles got caught in the divots that her heels kicked into the carpet where she loved a little song verse, where she pried the syllables from her favorite words.

If pressure can turn coal into diamonds, Dorothy’s tone rides the pitch of canaries in coal mines, and it’s all a fool’s errand in this underground bar, where fear is ripe and trouble is tradition.

If the paper walls of this speakeasy give rumors tired jaws, than Dorothy is the stongest of the bunch. She is the first live wire, some daughter of Edison, guarded by her own worst ears.

In her eyes a failed horse race only truly befalls gentlemen callers, and instinct is rescuing underage children from alcohol. As for the man that once weekended the crest beyond her knees, he carries his feet with the worn soles of someone’s tired husband.

Her name is Dorothy, she rides the line in the nineteen-twenties. She’s orphaned by society, once a teacher, now she doesn’t trust anybody. Everybody knows her name, and the sound her ice makes when she needs another drink, but never which bed she needs to sleep.

The Speakeasy hosts her wistful heart on some nights, most out of plenty. This is where she keeps a patient hand on her inner canary. That is where her inner clock ticks, and though she is scuffed up, she always gets out just before the trouble gets in.

And there you have it: “The Speakeasy” is a theatrical experience of such depth that it takes poetry to do it justice. This is because this amazing show does not hesitate to reach for the deepest of themes: love and death; war and peace; ambition and disappointment; time and memory. Add to this the enchantment of the supernatural, the immersion experience, the intimate one-on-one moments with the actors, and a troupe of remarkably committed performers and the result is something inspiring.

We hope that our poems will help to deepen your encounter with “The Speakeasy” and, also, we offer them as a thank you gift to the actors, writers, and crew who created and then shared with us such a remarkable work of art.

Go, and get drunk on the inspiration of it all.

“The Speakeasy” manifests at a secret location in North Beach on Friday and Saturday nights, as well as the occasional Thursday and Sunday. For further information, click here.