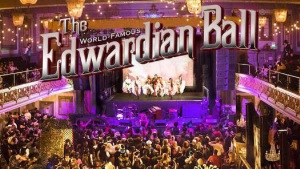 I will wager the same chemicals that our brains bestow upon the sight of a winning lotto ticket drive the dancing crowd in the Grand Ballroom of San Francisco’s Regency at The Twentieth Annual Edwardian Ball. The Edwardian Ball is a rare local anesthetic in this fashion: it begins in the last great cinch of a corset, upwelling the ends of so many lips. The lungs tied up in those ribs will sing exhilarating quick sharp breaths like birds flying around a cage. The heart hidden behind the breast coat pocket that holds a black rosebud will put enough blood behind someone’s wide eyes to pry, to wonder what spell has befallen them. After twenty years of tweaking the formula Rosin Coven, Paradox Media, and The Vau De Vire Society have nearly perfected a momentary fortune of wonder.

If you have never been to The Edwardian Ball bring eye drops because you will forget to blink. It is an immersive collection of fairy tales, a choose your own adventure, and a festival of dark arts and fevered splendor. Three floors and more than thirty acts and abstractions make up the abundant Ball ranging from shotgun ballets to reenactments of mid-century appendectomies. The Vau De Vire Society is particularly responsible for the extreme and unpredictable acrobatics. I am certain that they feed off of the hushed crowd’s simultaneous gasps. This year they provided a three-course meal of narrative feats consisting of “A Bohemian Ballet,” the reenactment of Edward Gorey’s own “The Lost Lions,” as well as a trip to hell and back in ‘Scarlet Letters.’

The only complaint one can make regarding the ball is that might just too much for one person to take in. For instance, the top floor, understatedly dubbed the “Museum of Wonders,” hosted the tenacious Kat Robichaud & The Shadow Circus Creature Theater, while, at the same time, the bottom floor staged the ever macabre “Dangerous Puppets.” It all adds up, no doubt, to an outstanding madhouse of possibilities.

At the very core of this ever enveloping experience is the crowd; it is the peak of people watching in a city already renowned for such a sport. The costumes are graciously clever and intricate without being fussy or serious.

The Friday before offers a must-see intricate Worlds Faire inspired by a parallel universe of whimsy and marvel. San Francisco is indeed spoiled rotten by such an escape to a wild and illustrious place. A single ticket, any ticket, to the Edwardian Ball is a winning lotto ticket. u+Unfortunately it only lasts one weekend, and is pretty quick to sell out every year, so don’t miss out next time.

The Edwardian Ball strikes late January every year; however, related events shall be listed here should you wish to investigate further.

Rating: ***** (For an explanation of TheatreStorm’s rating scale, click here.)