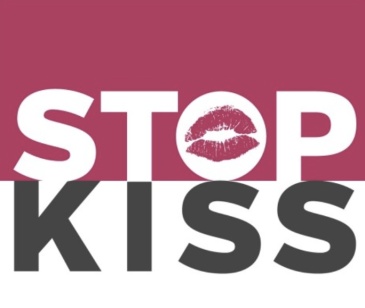 “Stop Kiss” gives us some good advice about “getting on” with love. First presented at the New York Public Theater in 1998, Diana Son’s delicate and elemental love story gives us the slow unfolding of love between two young women who are searching for a new connection. Callie (glamorous Heather Gordan) already has her Greenwich Village apartment, her job as an “up in the air” traffic reporter, and her sometime boyfriend George (macho Matt Monaco). But even as a wired New Yorker in the 90s, she finds herself adrift, aimless, and anxious. She is not settled, her apartment remains bare, and she is still a lost gal from Saint Louis. Her friend with benefits, George, played sharply and smartly by a quick and witty Monaco, keeps her afloat, while being amusingly clueless and brash. Monaco’s George smartly plays up his friendship with Callie, while trying to remain casual and aloof. Gordan’s Callie displays charming self-consciousness and a dark center that keeps her on edge and the audience interested in her next step.

On the title page Diana Son writes, “The cast should reflect the ethnic diversity of New York,” and TheatreFIRST has fulfilled her request, with five of the seven cast members.

In comes Sara (spunky Stephanie DeMott), friend of a friend, freshly arrived, who needs a place to store her cat (invisible), a hint of lurking love in a cage. Sara has fled Saint Louis, family, and a long-term boyfriend. She has left teaching at a private elite school and won a fellowship to teach poor kids in the Bronx, in a “dangerous” neighborhood. She is bouncy and lively and ready to share what she knows with students who really need and appreciate her. DeMott brings life and air into the tense Manhattan cynicism between Callie and George—making their scenes funny and touching.

Sara’s idealistic teaching goals alert Callie to more optimistic ways of living—but she feels trapped in cynical ways, having lost a boyfriend to her sister, while gaining an apartment. Callie and Sara share feelings a bit, while they do a slow dance around each other. We feel the growing tension and caring before they do—thanks to Michael Storm’s delicate direction, and the inevitable conflicts between Callie the high-flying helicopter traffic reporter and Sara the devoted teacher.

The set is charming, with blue-green walls that slide smoothly away to present alternate scenes, in the police station, the bench in a Greenwich Village park, and a hospital room. Ingeniously designed by Storm, the walls and furniture are changed by actors in a slow and darkened ballet, adding weight and thought to the developing drama. The disciplined dance moves in the dark between scenes reflect the social restraint and repression that keeps the two women apart for many suspenseful and comic scenes.

In the police station, we get a letter-perfect good cop Detective Cole (a sharp Robert Lundy-Paine), who smartly aims to find out the truth about the brutal attack on Sara, and succeeds. Lundy-Paine demonstrates how truth can cause pain, but also bring Callie to the next step in her realization. Mrs. Winsley (a compassionate Michelle Navarrete) displays what a citizen who witnesses a hate crime can do, even while suppressing her own problems and secrets. She brings complexity and warmth to the crime scene.

Sara’s Nurse (a perceptive, quick Jamella Cross) brings insight and intelligence to Callie’s confusion when she sees Sara in a coma. Sara’s ex-boyfriend from Saint Louis, Peter (a calibrated and concerned Mohammad Shehata) offers love and comradeship to the despairing Callie. With all this smart help, Callie still resists loving Sara.

Most striking, the play’s structure goes back and forth in time, both before and after the fateful first kiss that leads immediately to the brutal attack on Sara by a random stranger. They are sitting on a park bench in Greenwich Village, when a woman-hating and envious stranger sees them take their first kiss. That’s where the action of the play stops and also starts. That fateful kiss stops time, puts Sara in a coma, and brings Callie into the present.

Diana Son has experimented with time, dislocation, delay, and love almost lost in “Stop Kiss,” which has played all over the country since 1998. Her staccato but leisurely form plays well in this lyrical version, which uses female vocalists to cover the ghostly scene changes.

The scenes arrive in seemingly random order, allowing us to piece together the course of their reluctant love. They don’t know where they are headed. Callie is constantly changing from one chic dress to another, iillustrating her basic ambivalence and malleability. She doesn’t like being a traffic reporter, either, even when she wins an award for it. Callie is wandering, Sara is devoted to her teaching, and they both need a friend. It takes a while for them to find each other. Will it be too late?

The memorable denouement will stay with audiences for a long time.

The director, the actors, the set, the broken time frames—all contribute to a moving experience. The acting is subtle and superlative, making each moment a worth savoring.

IF YOU ENJOY READING THEATRESTORM, PLEASE CLICK HERE TO EXPRESS YOUR APPRECIATION.