by Charles Kruger
Rating: ****
(For an explanation of TheatreStorm’s rating scale, click here.) 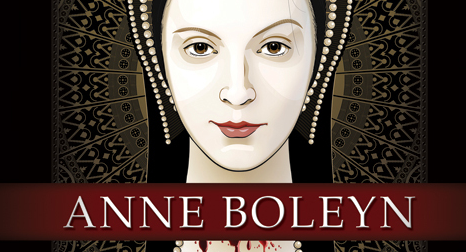 The story of how King Henry VIII’s desire to marry the beautiful Anne Boleyn resulted in his defying the Catholic Pope to turn Protestant and establish the Church of England (before having her head chopped off) has inspired an astonishing number of plays, novels, screenplays, operas, paintings, poems, and songs. Most theatre goers and film buffs will be familiar with at least two: the well-loved play, “A Man for All Seasons,” and the much-admired movie, “Ann of the Thousand Days.”

Howard Brenton’s “Ann Boleyn” is an excellent addition to this distinguished, and occasionally silly, genre. Breton was commissioned to write a play celebrating the 400th anniversary of King James the First’s Version of the Bible, the publication of which occurred nearly a century after Henry VIII had broken with Rome to establish the Church of England.

Brenton, recognizing the intimate connection between the two Kings, has devised a wonderful story to explore themes of kingship and religion, church and state, love and monarchy, and the too often hidden influence of women upon the movement of history (which of course is not “his story” alone at all, but “her story” as well). He imagines that James, struggling with religious dissension and the threat of Catholic loyalists, is literally haunted by the ghost of Anne Boleyn. The playwright constructs a marvelous plot, in which the action travels back and fourth between the two courts — separated by a century — the past influencing the present and the present influencing our understanding of the past, and all influenced by the realities of the unmentioned but equally influential “now” of the audience.

It works beautifully. Viewers who are not English history wonks may not grasp all the subtleties of plot, but this will not detract from anyone’s appreciation of this delightful play. The dialogue sparkles, the characters are bigger than life, the setting is suitably exotic and utterly British, and the actors’ diction and manner match the traditional portrayals of British royalty. This sort of play can border on camp — need I cite the ubiquitous “Lion In Winter?” — but that is part of the fun. Breton’s script and Minadakis’s sly direction manage to walk some fine lines between high camp, an enlightening history lesson, and fascinating speculation as to what might have been.

There is plenty of intellectual fun, court intrigue, romance, and gorgeous costumes and settings — all the right ingredients for this genre. And the actors, especially Craig Marker as both King Henry VIII and King James I, chew the scenery in the grand manner with no loss of dignity, which is no mean feat. Marker, a fine actor in contemporary stories, reaches beyond previous performances to deliver a larger version of himself which is thoroughly enjoyable and very impressive. Those who have followed his work will enjoy seeing this breakthrough.

As Anne Boleyn, Liz Sklar is cunning and sexy, innocent and wise, sounding a wide range of notes. The rest of the cast is excellent as well, with particularly fine work from Dan Hiatt as Doctor John Reynolds.

If this sort of anglophile theatrics in the grandiose manner is your cup of tea, your cup will runneth over.

IF YOU ENJOY READING THEATRESTORM, PLEASE CLICK HERE TO EXPRESS YOUR APPRECIATION.