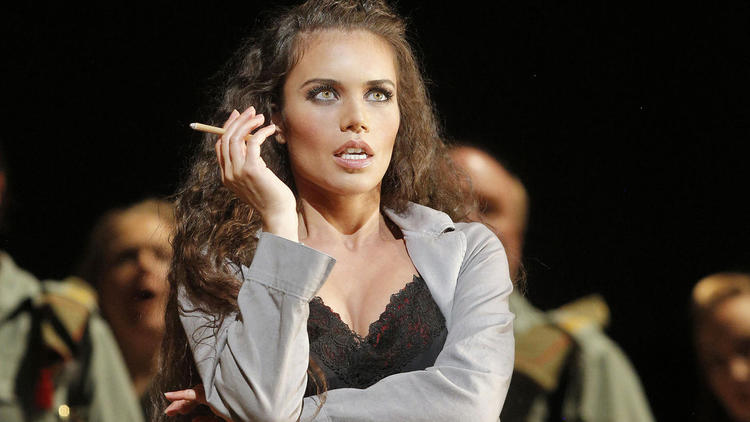 We all know “Carmen,” certainly one of the most accessible so-called war horses of the operatic repertoire. While we know it ends in violent death (it’s dramatic opera, right?), we also know we can count on it for rural charm, delightful gypsy dances, lilting melodies, and sentimental evocations of sunny España.

As the production opens, soldiers on parade are being disciplined by a handsome commanding officer who wields his whip like an S&M fetishist and seems unnaturally intrigued by the soldiers’ leather boots. Perhaps a subtle nod to Gay Pride Week? Meanwhile, a nearly naked and impressively athletic dancer literally runs circles around the entire company, repeatedly. (My companion that night described this beauty — sotto voce — as “diapered dim sum.”) And the band plays on: in this case performing Bizet’s delightful overture with wonderfully persuasive tempi and dynamics, under the very skillful baton of Carlo Montarano, who, incidentally, later received the most enthusiastic and well deserved ovation for this night at the opera.

At the start of the second act, we are treated to the return of the opening dancer, now posing stark naked (full frontal, no less) under a blue light, like an operatic Schwarzenegger. (My aforementioned companion has taken to calling him “Blue Boy” and wonders if the SFO will now adopt him as a mascot, to be slipped in somewhere in every production so we could enjoy spotting him, like Nina or Waldo, in unlikely but rewarding places.) Unfortunately, many of the opera’s blue-haired patrons and their escorts were not privy to this vision, as they had jumped ship during the intermission.

There is also a good deal of singing. Ginger Costa-Jackson, as Carmen, was adequate, but uninspired, although she did achieve some memorable low notes. Brian Jagde fared better as Don José, delivering a solid performance. Most satisfying was Michael Sumuel as Escamillo, whose thrilling stage presence was matched by a rousing bass-baritone performance.

Perpetrator, I mean director, Calixto Bieto, who has been called “an operatic Quentin Tarantino,” has stated that he wanted to emphasize the raw naturalism and violence of the Mérimée novel that inspired the opera, rather than rely on traditional, and less disturbing, traditions. I leave it to each viewer to decide whether the result should be considered enlightening or gratuitous.

It could be said that this production captures some of the feel of the old time opera, before Wagner and the middle class put it in a straightjacket, back when anything went.  Heck, we all know the music, but this Carmen is fun to watch.

In summary, I’ll paraphrase novelist Stella Gibbons’s famous comment on a writer she claimed to admire: This production of “Carmen” provokes considerable joy. It is, perhaps, not quite the kind of joy the producers intended, but it is joy, nevertheless.

IF YOU ENJOY READING THEATRESTORM, PLEASE CLICK HERE TO EXPRESS YOUR APPRECIATION

Note: The above cast and conductor are for the performance reviewed here. Many roles (including Carmen, Don José, and Escamillo) are played by different performers on different nights.